Charlotte Rose Gugliano was born on October 28th, 2017 at 6lbs, 0oz, and 21 inches long. This story was penned by Charlotte’s mother Bethany, and you can read Charlotte’s big brother’s birth story here. 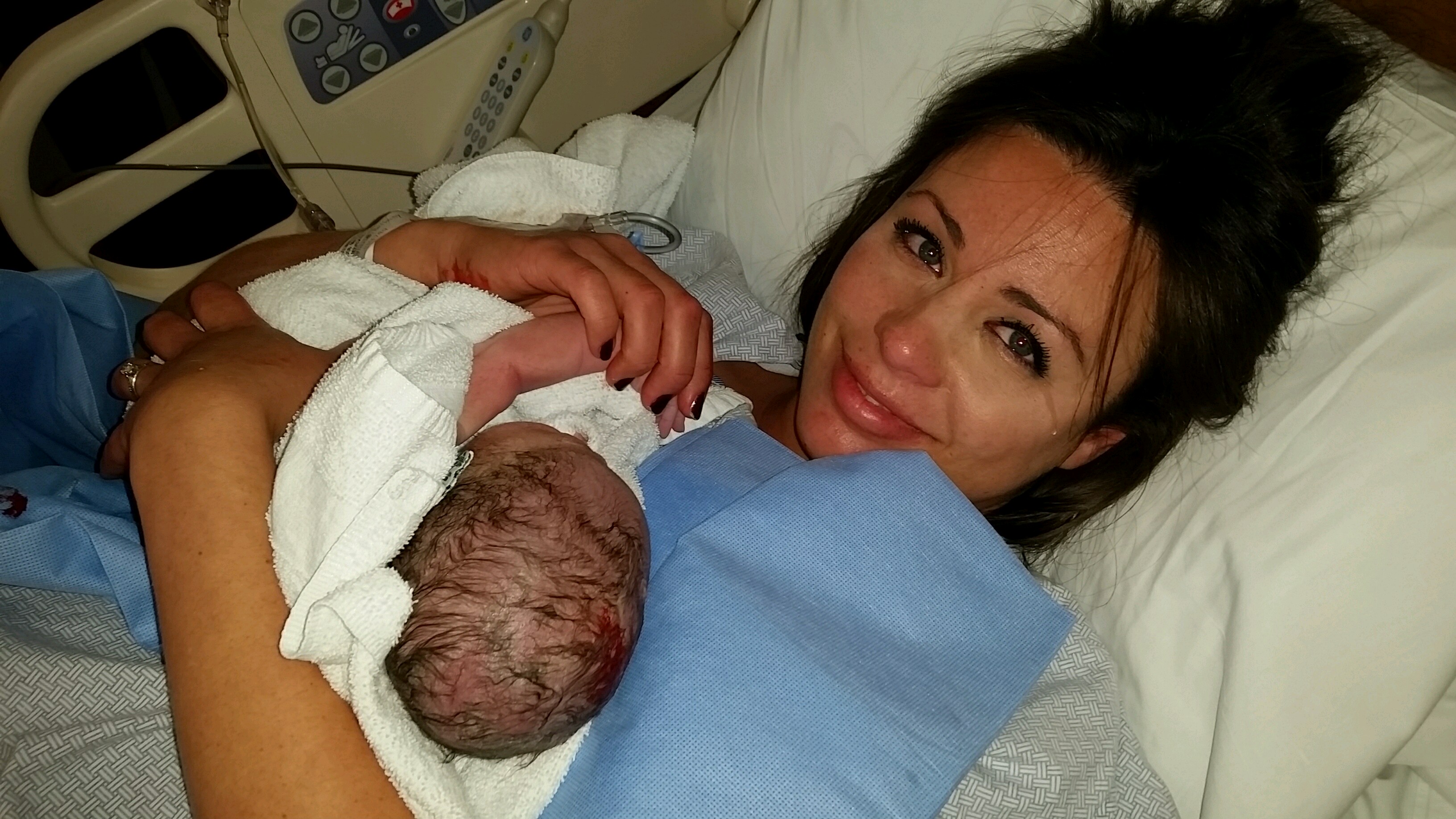 A Pregnancy Following a Loss

This pregnancy was admittedly “easier” than my pregnancy with Cole, but it was filled with much more anxiety and fear. We learned the hard way to not take anything for granted with our lost pregnancy, because it could be taken away at any time. I started having contractions again at 23 weeks with Charlotte, similar to when I started having preterm labor symptoms with Cole. However, they were more mild than with Cole. I was monitored again but not as heavily as before. In July at 26 weeks, I ended up getting monitored for contractions again but thankfully they puttered out. Throughout my pregnancy, I was hyper-aware of every movement, twinge and movement I felt from her. I analyzed everything closely, often out of fear that something would go wrong. But, much to my relief, we kept moving through each week and hitting each milestone with few worries.

A 37-Week Admittance, and Aiming for the End Zone

At 37 weeks, I had an OB appointment and found I was already dilated to 2cm. I had ongoing mild contractions, but they were irregular. I had been experiencing some pain with my contractions as well. I was told to head in to labor and delivery to have contractions monitored. Once there, we got all hooked up and had to wait. The nurse struggled to find a heartbeat for a while, causing a strong internal panic. However, after a few adjustments, it was found. In the end, I was told that things had stabilized and baby was measuring small, so expect to make it full term. Excited and determined, we headed home.

That next day, David had made plans to go to the Hawkeye football game with a friend and since he was going without me, he kept worrying about if I would need him. I continued to reassure him that I was fine, although secretly wishing I could have him home. I was in a lot of pain with more contractions than before, but they had fizzled away. Determined I would spend some time snuggling with my soon-to-be big boy, I showered and did some laundry before David headed out the door. He was in the process of making some lunch when we all reconvened in the kitchen, going over some general details.

We chatted about tailgating plans when I picked up my basket of folded laundry, wishing him a good time, and suddenly, I felt a huge gush! David saw it in my face and he immediately asked if I was ok. Unsure of if I had peed myself or if my waters had broken, I ran to the bathroom to check. Sure enough, it was my waters. I gave it a few minutes to really be sure since I had lost some fluid in a similar manner with Cole but it was not a full bag eruption, so I wanted to be sure. I came back downstairs to talk to David and I told him my water broke. I will never forget the look on his face as I could see the wheels turning in his head of “I’m not going to the football game, I’m going to have a baby.” It was cute and definitely a memorable moment. He quickly made the mental shift and took the lead on getting us ready to go to the hospital for baby #2!

Heading to the Hospital

We quickly called Grandma and Papa, who were on-call for when we went into labor. They came and got Cole while we packed the last few things into our go bag. We had a short yet sweet moment with Cole right before we handed him off, telling him that we were going to go have his little sister. Although he was far too young to grasp what we were telling him, we knew that his life would change forever! We had to move quickly as contractions were picking up and I needed to get to the hospital. We had to drive the long way to the hospital due to all the football traffic. But after a drive that took twice as long, we made it!

When we got there, the nurse on-call was not convinced that I broke my water. As we got checked in, I could hear her calling the OB on call, my personal OB, and spoke quite disrespectfully about my situation (which I later shared with my OB). The nurse came in to check me, skeptical that my water broke and she was quite surprised to see that my bag of waters had fully erupted and that I was dilated to a 4. I fought back a sassy remark about her unprofessional attitude but quickly decided against it. I needed to focus on priorities (but still, what the hell!) We quickly got robed up and ready.

My contractions became pretty steady at that point. I tried a variety of methods to get through the contractions until my anxiety started kicking in and the pain wore on me. I opted for an epidural. The anesthesiologist arrived about an hour after that, and I’m very glad I got mine when I did. 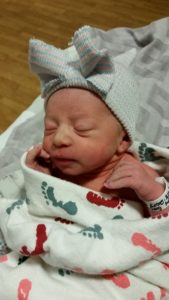 I could tell that I was progressing quicker than with Cole. But, like when I was in labor and delivery with him, after I was fully dilated, I was told to wait for a while. I hunkered down, waiting. I could tell I was getting close as contractions were getting closer together and my pain was increasing, although I had an epidural. (I feel like it’s a common misconception that if you have an epidural, you don’t feel anything. I was not feeling intense, sharp pain, but I could certainly feel when the baby moved, when it was time to push, pressure in various spots, how and where to push, but just not the intense pain. For me, I was thankful that I did not have the intense pain, especially with Cole due to the extenuating circumstances, but it helped me remain present and calm throughout labor and delivery rather than focusing on the pain).

I remember waiting and having the nurses keep checking on me to see how baby was doing. I kept watching the clock, praying it wasn’t going to be anything like Cole’s labor. My OB was in the room, chatting with David when I could feel baby transition. My epidural was wearing off so my pain levels were high. I suddenly felt a pretty sharp pain. The nurses came in and very urgently started prepping me to push. I pushed for about 30 minutes and through about 9 contractions when she was delivered!

A Cherished Meeting on Mama’s Chest

The first thing I heard once she was delivered was “oh my gosh, she is so little!” Initially worried that she was too small, she weighed in at a whopping 6lbs 0oz, and I was reassured that she was just petite. Small, yet perfectly sized. Her cord was wrapped around her neck and although she was slightly blue and needed some help breathing right away, she was healthy and cute as can be! The nurses said after the fact that when I had mentioned feeling a sharp pain, her heart rate started decreasing, and it made sense that her cord was around her neck in retrospect.

The best part of her labor with her was being able to hold her on my chest right away. I was not able to do that with Cole due to his traumatic labor. And after losing a baby during pregnancy, holding a live, breathing, real baby in my arms was the best, fullest, most surreal moment. It’s hard to describe it with words, but there was such wholeness, closure and a full scope of life and death all wrapped up into one tiny, 6lb little girl that signified such a journey for us. David took a picture of me holding Charlotte once she was on my chest and the flash of the camera reflected off a tear. David and I both felt that after a pregnancy loss, we struggled with having any sort of physical reminder in this world that our child existed. He or she existed fully in our hearts and until Heaven called that child home, that child was alive within me. When we both look at our first picture of Charlotte, that tear is highlighted and serves as a reminder of our miscarriage journey. A loss made whole through the birth of this sweet, petite girl.

Find a Doula for Your Next Birth